Warning: Invalid argument supplied for foreach() in /home/customer/www/deepsim.stupendous.org/public_html/wp-includes/class-wp-theme-json.php on line 1109

In the new 2017.11 version of DeepSim there has been a significant change.

In previous versions, all injector wells used to be water injection wells. No other forms of injection were allowed. In the new 2017.11 version, this has changed. You can now specify the mass composition of the fluid being injected per injector well.

By being able to specify the injection component mass fractions, you can now conveniently model:

An example of a injection well that simultaneously injects water and gas is given below. 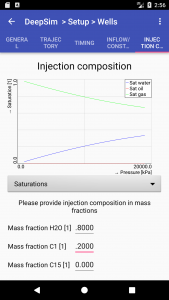 To make the well inject water and gas at the same time, the mass fraction for the H2O components has been set to 0.8 and the mass fraction for the C1 component is set to 0.2. Since the subsurface properties of the fluids being injected depend on the reservoir conditions, DeepSim conveniently plots the fluid properties for a range of pressures. This allows you to set the injection composition such that the properties of the fluids you are injecting meet the specifications.

The new functionality in the 2017.11 DeepSim version thus allows you to model different EOR/IOR mechanisms such as gas injection and WAG, conveniently from your Android phone or tablet.

Share on FacebookShare on TwitterShare on LinkedinShare on Xing

Comments are closed, but trackbacks and pingbacks are open.